Looking for a legal WNBA betting site in your state? Unibet is a licensed WNBA betting partner in the US! Drop your bets on live WNBA games with a $500 RISK FREE BET!

WNBA Betting Guide How to bet on the WNBA online

Step 1 Check if WNBA betting is legal in your state

Every state has its own regulations so we recommend you to double-check yours to see if WNBA betting is legal in your state.

You can bet on the WNBA on our sports betting site if you live in:

Now that you are 100% sure that WNBA betting is legal in your state it's time to move on to step two.

Check out a legal WNBA betting site like Unibet and get a feel for the latest WNBA odds and betting offers.

You'll also find our WNBA betting app on our website.

Betting apps make it easier for you to bet on live WNBA games while you're watching the game!

You can check out the latest WNBA odds and betting lines for free on online sportsbooks.

But If you want to place a bet online, you need to sign up and make a quick deposit.

Your deposits are usually processed instantly on Unibet.

You can sign up with Unibet in less than 90 seconds.

That's it!
Now you're all set to make your first WNBA bet online.
We told you it was going to be easy!

How does WNBA betting work?

Women’s basketball is a historic sport but it’s starting to enjoy huge growth in the present day. The WNBA began in 1997 and it’s developed continuously since that point.

Let’s get back to basics. We need to begin by asking two questions:

What are WNBA Odds and and what are they mean?

Good questions: Let’s open up with odds. These give us two key pieces of information. 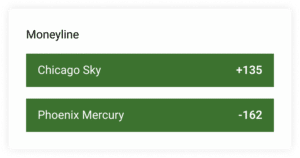 It’s a bet on the match result in the game between the Chicago Sky and Phoenix Mercury. Sky have odds with a minus symbol in front and this means they are favorites.

Phoenix, with a plus prefix in front of their odds, are the underdogs.

We’ve just answered the question of probability: According to that bet, Chicago Sky have a higher chance of winning the game.

The second answer we wanted was related to payouts. How much do we get back if our bet wins? The specific numbers are important this time. At odds of +135, a stake of 100 Bucks on Phoenix wins $162.00.

The numbers are for illustration only. You can stake what you like between lower and upper limits.

Probability and payouts: That’s why odds are there.

Public Betting on the WNBA

There’s a phrase in the betting world. It refers to ‘betting with the public.’ It means to bet with the favorites, and it picks up that point about probability. Favorites don’t always win. Since 2010, seven different franchises have won the WNBA so we know that results will vary.

But that probability element remains important. The public are saying that a certain outcome has a higher chance of landing. They will identify a favorite an underdog. Our odds setters then put their coffees down and set the final figures.

What are the different bets you can drop on the WNBA?

You have already seen the most popular WNBA bet. The Moneyline bet is a good place to start when you’re a greenhorn to WNBA betting. Picking a winner may be tricky but there are just two options. Which team will win is the question that you need to answer.

After that, there’s lots to choose from.

Think of a points spread as a winning margin bet. Here’s an example from that same Sky v Mercury WNBA game.
Then you’re going to love betting on NBA point spreads! 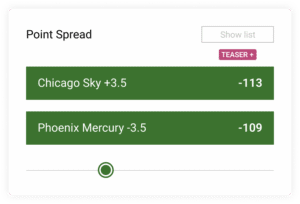 Here, the Chicago Sky are favorites to win by at least four points. If they do so, odds of -113 will pay out. A bet on the Phoenix Mercury will pay at odds of -109 if they win or lose by three points or fewer.

#2 Total points or over/under bets in the WNBA

Basketball games are decided by points. We can see low scoring matches or higher scoring affairs. It’s also possible to bet on the total points in a game. 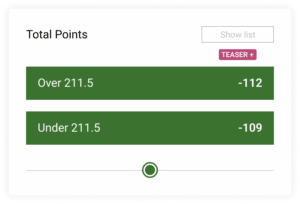 Want to change up those odds? No problem. The green circle at the bottom of that image is a slider. Move it from left to right and you have the power to set your own points line. 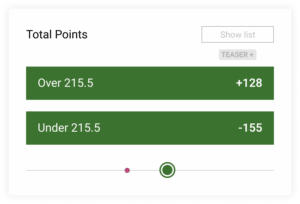 Now we’ve moved the slider up a few notches. Our line is at 215.5 and we have some odds with a +prefix. The slider gives you control and allows you to set the line to your own preference.

The term ‘prop’ is one of the simpler pieces of betting jargon. It’s short for proposition and it’s proposing that an event might happen in a game.

For WNBA betting, we have two types of props:

Game Props which may include:

Then we have player props such as:

To find the props, scroll past the main list of WNBA bets and check out the drop down menus.

We are literally looking into the future now. A Futures bet is a long-term wager which plays out across a season. In the WNBA, it’s mainly about picking the Champions. 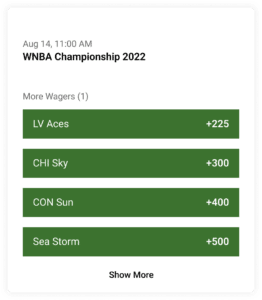 This image was taken midway through a WNBA season. The best performing teams rise to the top. If you think that an underdog may come through, click on the Show More tab and additional franchises appear.

WNBA Futures betting will also offer options to stake on the MVP.

What’s a Parlay? It’s simply a multiple bet with at least two picks. It can be placed within one WNBA game using any of the available WNBA betting options.

The important thing to remember is that all of those picks have to win. If one fails, the whole bet is lost.

Here’s an example of a single game WNBA Parlay. 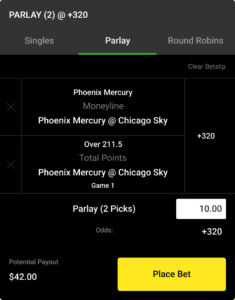 We’ve stayed with the game between Phoenix Mercury and Chicago Sky. We’re looking for Mercury to win and Over 211.5 points. Our preferred stake is 10 Bucks and we can see a potential payout of $42.

If we’re happy, we just need to click on that big yellow button.

Parlays can also be made across two matches or two events. In this example, we’ve used the two main WNBA Futures Bets: 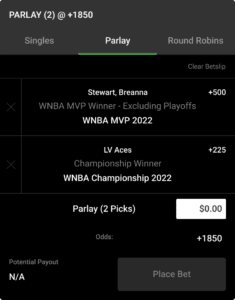 Here, we’ve gone for Breanna Stewart to win the MVP award and the Aces to win the Championship. As we add selections to this 2-leg parlay, the odds update. Type in a stake and the potential payout is shown.

That Place bet button will now turn yellow. If you’re happy with how it looks, click the button and the bet will ride.

Tips and Strategies for WNBA Betting

It wouldn’t be fair if we left you now: Unibet have been doing this since 1997 and there’s a ton of knowledge that you can tap into. We list stats that can be useful, but we’d like to take things further.

Nobody can give you any guarantees but here are some tips that can help.

#Tip 1: Listen to the Public’s Voice

Every sports fan has an opinion and they want to be heard. The wider betting public have their say by electing a favorite and an underdog. You don’t have to agree but you should remember how they reach that conclusion.

Probability is at work here: The public know what the stronger option is and who is more likely to win. Take that opinion on board but make sure you have the final say.

#Tip 2: Making up your own mind

You’re a leader not a follower. By all means when you’re betting on the WNBA bet with the public but don’t do it blindly. Use the power of your own research to come to a conclusion.

What type of research do we mean? Here are some points to consider.

Recent results can offer the best indication moving forward. Is one team coming into the game on a good run of wins while their opponents are on a losing streak? That would suggest that the team with better recent results will win the next contest.

Nothing is certain but form is the first indicator to look at.

Have these teams met already this season? Head to head results can offer valuable insight. It’s another area of research that doesn’t offer guarantees but it’s possible to spot patterns.

One team may have a particularly bad record against another. Look for the statistics and you may see clues moving forward.

Injuries to the Roster

Look out for WNBA team news. If one franchise is missing a world class Point Guard they will obviously be weaker. Injuries and other absences will weaken a roster, and this is all vital information.

Home Court Advantage in the WNBA

Does your chosen team have a better record on the road than at home? The stats are easy to find and you should put them to work.

A strong home record suggests that a team is more likely to win if they are on their home court moving forward. Home advantage doesn’t work for every team but it’s another factor to take on board.

#Tip 3: Choosing Your Bets in the WNBA

Some of our customers consider all bets but many focus on one area of WNBA betting. The Moneyline pick is the most straightforward. Consider that research and the question of probability before making a decision.

If you’re new to WNBA betting, the Moneyline is the best starting point. Use that research to decide which of the two teams will win.

Then we come onto parlays. A parlay bet does increase the odds and payouts can be higher. However, there is that greater exposure. If one of your picks fails to come in, the whole bet is lost.

Parlays are popular but consider them carefully before you get involved.

Betting is all about choice. Unibet offer you a choice of WNBA bets and we appreciate that you have other options. To back up that range of bets, we are also crazy about competitive odds.

Our odds are excellent across all basketball betting but there are ways to add some value. We publish a welcome offer at the start of your journey and there will be other promos too. How can you keep pace with them? Either opt in for notifications or keep checking our website.

We don’t want you to miss out so please stay in touch.