Check out some of the best odds and betting options for the NFL preseason and grab your $500 RISK FREE BET!

How to bet on the NFL Preseason

Every state has different laws when it comes online sports betting.
If you live in a state where it's legal to bet on the NFL preseason you can look for a licensed online sportsbook in your state like Unibet.

Once you find a licensed betting site you get a feel for the odds for the preseason.Betting sites come out with moneylines when the NFL brackets are locked in.
If you're new to sports betting and are wondering how NFL odds work during the preaseaon stay tuned because we'll give you the skinny on that!

If you like the odds and want to place your bets you need to sign up and make a deposit.
On Unibet you can sign up in less than 90 seconds.
When you sign up with us you also get a chance to grab a $500 risk free bet

You're all set now.
Place your bets and enjoy the preseason!

How Does NFL Preseason Betting Work?

Preseason? There’s not much going on is there? Well, there is a whole set of NFL games in place as the teams get ready for the regular campaign. Starting with the traditional Hall of Fame match, this is an important time for all franchise teams.

At Unibet, we have a whole section dedicated to the NFL Preseason. Click on the football tab and follow the links. If you want to know more, please read on.

What do NFL Preseason odds mean

Odds are vital and they tell us two things:

1)The likelihood of an event happening. E.g., will Team A or Team B win?

2)The amount of payout we receive if our bet wins.

Here’s a the most popular and easiest bet you can make during the preseason.
If you're familiar with how NFL betting works during the regular season you might know this one.
This bet is a called a moneyline bet and here’s an example pf a moneyline from the 2022 NFL Preseason. 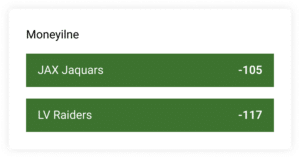 In the game between the Jaguars and the Raiders, both teams carry minus symbols ahead of their odds. If you bet on Oakland…, sorry. If you bet on Las Vegas, you will need to bet $117 to win $100.

A bet on Jacksonville requires a stake of $105 to win 100 Bucks. The Jaguars have the lower odds so they are the favorites while the Raiders are the underdogs.

This one little image has answered both of our questions. The probability factor shows that the Jaguars are more likely to win. The exact numbers tell us how much we will be paid if the bet wins.

Public betting during the NFL preseason

If you’ve traveled around as much as the Las Vegas Raiders, you may have heard the phrase ‘Betting with the Public’. This simply means that you are betting on the favorite. If you are betting against the public, your stake goes on the underdog.

When an NFL preseason game appears, the majority of the money goes on the team who are most likely to win. There’s your probability factor once again. It’s then down to our odds setters to confirm the final odds.

Your task now is to bet with or against the public. A little later on, we’ll give you some advice on how you can make that decision.

What bets can I place during the NFL preseason?

You’ve already seen the Moneyline. This is the bet on the match winner of any preseason game. It’s available for all the big matches during this August period.

You can also look at Moneyline bets for the first round of NFL games. Here’s an option for the start of 2022 NFL preseason. 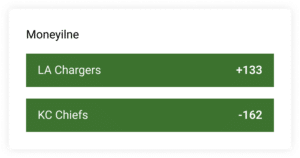 In the game between the Chargers and the Chiefs, Kansas City are favorites at -162. LA are the underdog and they have a plus prefix. When a plus sign appears, you need to bet $100 to win that sum.

Remember that you don’t need to stake those amounts - they are just for illustration purposes.

A Point Spread is defined as a bet on the winning margin. It’s back to preseason where the Jaguars are facing the nomadic Raiders.

The Raiders carry the lowest odds here. The figure of -104 means that they are favorites to win by at least two clear points. A bet on Las Vegas requires a stake of $104 to win $100.

If the Raiders win by two or more, the bet pays. You can, instead, bet on the Jaguars. If Jacksonville were to win, or lose by just one point, the bet pays at -117.

Most sports offer totals betting and the NFL is no exception. It’s back to those Jaguars and Raiders for an illustration.

Points lines can vary and those odds can also change. Just head to the NFL Preseason section of Unibet’s sportsbook to find what’s available.

A Prop is a Proposition bet on an event that might happen in a game. There are team bets and player props bets which might include:

There will be fewer props for preseason games. Compared to regular NFL matches, the choice focuses on the three main bets - Moneyline, Points Spread and Total Points.

If there are any props for your chosen game, scroll down to see what’s available.

A Parlay is a multiple bet. It must consist of at least two selections and both of those picks have to win.

There are two types of Parlays: A single game Parlay consists of bets within the same match. A multi-leg Parlay covers two or more games.

Because there are fewer bets available during NFL Preseason, a single game parlay may not appear. If there is more than one game listed, a multi-game parlay can be used.

To illustrate this, we’ve taken that Jaguars vs Raiders game and added two matches from the regular NFL campaign. 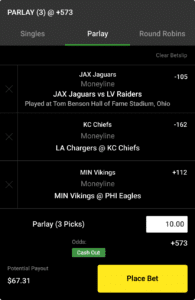 We’ve gone for the Jaguars, the Chiefs and the Vikings all to win. When our picks are inserted, the betslip calculates the odds. When you input your chosen stake, the potential payout is also shown.

If everything looks OK, hit the big yellow button and your bet is staked.

A future is a long term bet, usually on the winner of a tournament. Preseason is a good time to find form and test out players but there is no silverware up for grabs.

You won’t find Futures bets within the Preseason page but it might be a good time to consider the regular NFL campaign.

There is a futures tab in the football page of Unibet’s website. Click on this to see what’s available.

Earlier in this round up we promised to give you some advice. We can’t guarantee that you will land winners on a regular basis but it’s worth following some strategy tips. Arming yourself with as much information as possible is a sensible approach when you’re betting on football games in the NFL preseason.

Tip #1 What do the Public Think?

Remember that the public are working on probability. They stake their money and identify a favorite in the process. That favorite has a higher chance of winning during the NFL preseason. Underdogs will come through on fewer occasions but is this the right time to check the outsiders?

Do you bet with or against the public during the preseason? Only you can make that decision, but you should listen to them first.

Tip #2 Do your own Research

Now it’s time to decide whether the public is right or if they’ve lost their minds. The only logical way to do this is with thorough research.

What should you look at?

Form: This is tricky in the NFL preseason because the teams will have been dormant. It’s still worth looking at results from the previous campaign to see if those franchises finished strongly.

New Acquisitions: How did those teams perform in the NFL draft? Have they completed some exciting off-season trades? Have their best players left for another franchise?

Team News: Following on from the previous section, we suggest checking the line ups. Injuries and other absences can weaken a team and hand the win to their opponents.

What type of bettor are you? If you’re new around here, then we suggest betting on moneyline during the NFL preseason as a starting point. Experienced players also like this option as it’s easy to follow. Picking a winner may not be simple but the equation is as straightforward as it gets:

Which team will win?

To make things more complex and to change the odds around, you can switch to the Points Spread. With so many ways of scoring points in an NFL preseason game, winning margins can lead the way to your preferred options.

Parlays and Props won’t appear quite as often in preseason. Remember that if you do Parlay, you can boost the odds but you will also heighten your exposure. Only one leg of your multiple has to fail for the stake to be lost.

Parlays aren’t for everyone but they still need to be considered.

Unibet are crazy about giving you competitive odds across all NFL Preseason betting options. There is value across the sportsbook but it’s only the start.

You can look to claim bonuses at every point in your journey. A welcome promotion is available in return for a quick and secure sign up. Ongoing deals may then be accessed through the life of the account.

We don’t want you to miss them. Be sure to opt in for notifications and keep checking our website for all the latest news.