Now that you know you live in a state where Champions League betting is legal it's time to move on to step two.

Check out a licensed betting site, like Unibet, or download their betting app and get a feel for the latest champions league betting odds and lines!

You can check out the latest Champions League betting lines and odds for free in online sportsbooks.
If you want to place your bets with real money though, you need to sign up with the sportsbook and make a deposit.

You can sign up with Unibet's betting sites in less than 90 seconds.

That's it!
Now you're all set to make your first Champions League bet online.
We told you it was going to be easy!

It might be Europe’s biggest club tournament but the Champions League has a huge following all over the world. At Unibet, it’s one of the most popular areas of our sportsbook.

This important soccer competition has bets available all through the sporting calendar. If you’d like to know more, please stay with us.

When you’re just starting out, you need to know the answers to two questions:

What are Champions League odds and how do they work 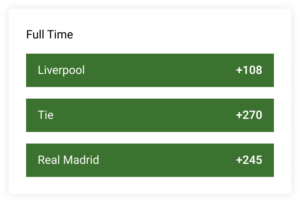 This bet is from the Champions League final of 2022. There are three possible outcomes for the result in 90 minutes - a win for either team or a draw.

Liverpool have the lowest number and this means they are the favorites. Instantly, we’ve dealt with the question of probability. This bet tells us that Liverpool are more likely to win.

Real Madrid, and the tie, are the underdogs.

What about payouts? The answer to that question lies in the exact numbers.

Odds can have a minus prefix: Here’s a bet from the same game: 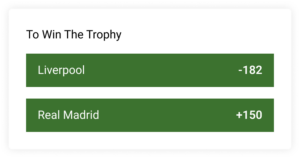 The To Win the Trophy bet will include any overtime. Here, you would need to stake $182 to win $100 if Liverpool won the trophy. A winning bet on Real Madrid will pay $150 for every $100 staked.

Public betting in the Champions League

Have you ever heard of the phrase ‘betting with the public’? This means that you are backing the favorite. When the bets are released, the community assesses the game and decides who is more likely to win.

In this case, the majority view is that Liverpool are the better team. Our odds setters simply take over and apply the exact odds. That’s another example of probability in action. It’s considered that Liverpool are stronger and the public has identified a favorite and an underdog.

You need to decide whether to bet with or against the public. Don’t worry, you don’t have to do that now. We’ll offer some advice a little later on.

We’ve shown you two of them. Full time bets appear for all games in the Champions League. The To Lift the Trophy option only appears for the final. That’s obvious, but there are similar alternatives.

In the knockout rounds, there are bets on which team will qualify for the next round. That’s a good starting point but we’ve lots more to get through.

It wouldn’t be sport without a Totals bet. They are available in most events and soccer is no exception. 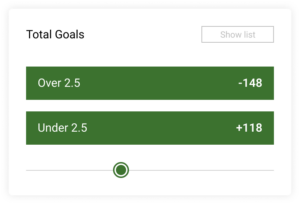 This goal line has been set at 2.5. There are two options. You can either bet Over or Under that goal line.

If there are at least three goals in the match, winning bets pay out at odds of -148. For two goals or fewer, winners will receive payments at odds of +118.

This isn’t the only available line. That green circle at the bottom of the image is a slider. When moved from left to right, it reveals other Total Goals bets. 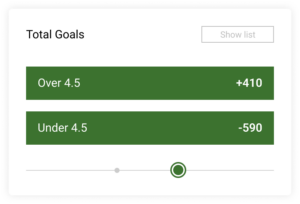 For the above bet, those who think the game will be a high scorer would consider going Over 4.5 goals. The odds for a lower scoring match are much shorter in this example.

#2: Both Teams to Score bets in Champions League Games

Often abbreviated to BTTS, Both Teams to Score is available for all big soccer matches. 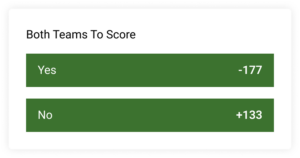 There are just two possible outcomes. The simplicity of Both Teams to Score makes it a popular bet.

In this case, winning bets will pay at -177 if both teams find the net. If either, or both sides fail to score, the odds for this game are +133.

It’s jargon busting time. The word ‘prop’ is short for proposition. It can relate to a specific event in a match and we are ‘proposing’ that it might happen.

Props in Champions League betting can come in two categories:

Team Props Will Typcially Include:

Then we have Player Props which would include:

We don’t have a section specifically for props but they are easy to locate. Just click on your chosen match and scroll down past the main bets. Props will be available via a drop down menu.

It’s time to look ahead. A Futures bet is a long term stake across the season. They are available for most soccer tournaments and usually focus on the outright winner.

For Champions League betting, Futures can include:

It’s easy to find them. Just follow the links to our Champions League bets. From there, click on the tab marked ‘Futures’.

What’s a parlay? It’s simply a multiple bet with two or more picks. Here’s an example: 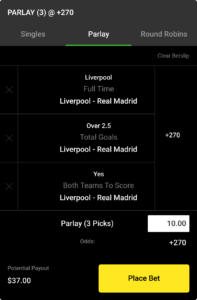 From that 2022 Champions League final, we’ve gone for Liverpool to win, Over 2.5 Goals and Both Teams to Score. This is known as a single-game parlay.

Individually, those odds are relatively low with minus symbols in front of them. Collectively, they add up to +270. This is why parlays are popular. There is scope to increase the odds but you must be aware of the mechanics.

Only one bet has to fail for the stake to be lost. So, if Liverpool won this game 3-0, we’d be unable to collect. Two bets have landed but Both Teams to Score has failed so the overall parlay has lost.

There is a second type known as a multi-leg parlay. 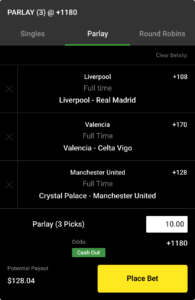 You can keep your soccer parlays within the Champions League or you can spread them across other competitions as we have done here. In this example, we need Liverpool, Valencia and Manchester United all to win.

As each selection is added to the betslip, the odds update. When you input your chosen stake, the potential payout is shown. All the information is there before you place the bet. If it looks good, click on the yellow button.

Unibet has 25 years of Champions League bets behind us. We learnt quite a bit over the years, but we don’t want to keep all of that knowledge in house. If you’d like some tips and strategies for betting on Champions League games, read on!

Public and probability. They are behind our odds for any Champions League bet. As the games approach, the favorites and the underdogs are separated. Probability is telling you who is the stronger team.

The public work on all Champions League bets and there will always be favorites. The question now is whether you believe that majority opinion. Probability is having its say but only you can make the final decision when you’re betting on Champions League games.

#Tip 2: Making your mind up

How do you reach a conclusion? Unless you’re blindly betting with the public then you’ll need to do some research. Here are points to consider.

Head to heads can offer some pointers. The collective form of Liverpool and Real Madrid must be strong otherwise they wouldn’t have made it to the 2022 final. But it might be useful to know that these two teams met each other in the final of 2018.

Real Madrid won 3-1 back then and some of the players from both sides would be involved four years later. Would that have a say in the 2022 result. Maybe yes, maybe no but it’s worth knowing.

More recent head to heads might include results from the Group Stage. Round Robin matches get the Champions League underway and earlier games can offer useful information.

#Tip 3: To Parlay or not to Parlay

Think carefully about parlay betting in the Champions League. We’ve seen how the odds increase and that’s the positive element. There is the balance of greater exposure to think about. All selections have to win in order for the bet to pay out.

If you’re just heading out on your Champions League betting journey, we recommend starting with the Full Time bet. It’s simple to understand and it’s a logical opener.

Your analytical skills will be tested in other bets. Goals betting requires close study of scoring stats. If you’re looking at goal scorer betting, information relating to the players is vital.

Decide what type of bettor you are and stick to a plan.

We’ll offer you competitive odds at Unibet. We are crazy about keeping the odds high but there are ways to add to that value. Offers and promotions are available: They change all the time but might typically include price boosts, free bets, matched bonuses and more.

We don’t want you to miss these so remember to opt in for notifications. Alternatively, just keep checking back to our website and click on the promotions tab.